An ancient Vampire. A Dragon on the run. A Thirst that won’t be denied.VictorI’ve never lost control, until now. A Thirst has overwhelmed me. It’s more powerful than anything I’ve ever encountered, causing cravings that are driving me to the brink of insanity, and to do things I abhor. Then it comes… a hint of a scent on the night air, tantalizing, hypnotizing, and calling me to my salvation. I have to find her. If I don’t, I’m certain this Thirst will take me over, mind, body, and soul and I’ll be lost forever… and she will too. She’s in danger and I have to rescue her. From what? I don’t care. I’ll destroy anyone who dares to stand between us. She’s mine and I must have her… Get the paperback HERE!ALL THESE BOOKS ARE ENROLLED IN KINDLE UNLIMITED! READ FOR FREE WITH KU!

Do you love listening to your books? If so then you can grab Victor on audio! 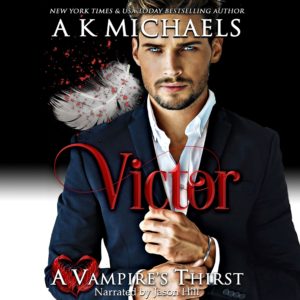 Lost in a foreign city, ancient Vampire Flint, finds himself facing the toughest battle of his life. What was supposed to be a vacation has turned into a battle to save a young Scottish lass in danger as well as his own sanity when he’s struck with a mysterious Thirst. One that he’s finding hard to control and he’s terrified that if he slips down that route he may never return.With a horde on his tail and the beautiful and injured Kenzie McBride in his arms, he’s struck with the revelation of who and what she is; the most elusive and precious of things in the whole damn universe: a Vampire’s Bloodmate. His Bloodmate. And he’ll fight to the death to keep her safe from anyone who comes after her. Anyone. AVAILABLE IN AUDIO HERE!AUDIBLE AMAZON iTUNES Get the paperback HERE!

Quinn Alexander is rich, handsome…and an ancient Vampire. He doesn’t want to be in Hong Kong for the launch of his next multi-billion dollar gaming sensation, but needs must.Then the Thirst strikes. Like a bolt of lightning, quick as a snake’s bite…power surging through him at the same time as his craving for human blood rockets out of control…and if there’s one thing that Quinn abhors it’s losing control. Of anything.Lost in the backstreets of a foreign land, a scent assaults him, overpowers his senses, stuns him completely until he’s rushing headlong toward it with no thought other than to reach it and make it his. A shout, a scream, a cry for help…and Quinn knows it’s his Bloodmate.Can he reach her in the meandering maze? And when he does will it be in time?

Get the paperback HERE!

A Masquerade Ball…A secret gathering of Bloodmates…And an ancient Vampire who wants them dead!Victor Strong has organized a top-secret Ball to be held in Scotland and invited some unusual guests; the newly-found Bloodmated couples. The Directive helps in his plans and all looks perfect…until it doesn’t. Attacks on guests alert him and his friends, Quinn and Flint, that their location has been leaked and danger is around every corner…Vampires and Shifters are on a quest to hunt their enemies and their end game is obvious: death to all.Can they survive the evil that has invaded Quinn’s castle? Or will they succumb to the horde clamoring at their doorstep with murder in their hearts? Get the paperback HERE!

A Deadly Collection…A thrilling collection to set your kindle on fire with suspense, action and paranormal romance!Grab all four books in A Vampire’s Thirst series…Victor, Flint, Quinn and A Deadly Masquerade are all included in this set which is sure to keep you glued to the pages as you whisk your way through them all in one go! A bargain!

You can find the rest of books in this fabulous series by clicking HERE or the image below! 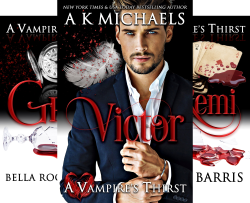 All books on this site are copyrighted