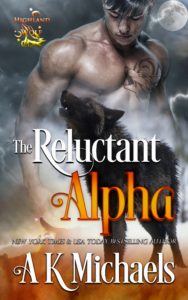 Destiny will only take a backseat for so long…

I’ve ignored my Wolf and home for years. I don’t need them or anyone. I’m rich and powerful. But with one phone call, I’m forced back into a life I loathe. A life I’ve never wanted…Pack.

My Uncle is under attack when I arrive and that changes everything. Including me. Something inside me shifts, comes to life and suddenly I can’t walk away. When I stumble across a white She-Wolf being hunted my beast roars to the surface in her defense. The result? A dead body at my feet and her eyes haunting me with her fear as I cradle her in my arms.

I swore not to stay. Swore never to care. Now? Now, I’ve no damn clue what to do…except find the white She-Wolf and keep her safe…

Join Cameron ‘Sin’ Sinclair and his Highlanders in THE RELUCTANT ALPHA, book one in New York Times Bestselling author A K Michaels’ paranormal romance series, that’s full of alpha males, hot Highland wolves, and enough thrills and spice to keep you turning the pages into the wee hours of the night. 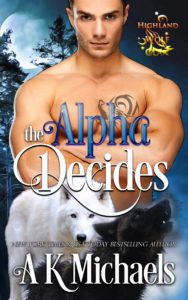 I’m Alpha. How the hell did that happen? Yet…here I am. And not of one, but two Packs that need my help to recover from the devastation wrought on them by evil.

The white She-Wolf I rescued is in my home. She won’t wake. But I can feel her. Sense her, calling to me…beckoning my beast to hers. Why can she affect me like this? Who is this siren that pulls me to her side even though she’s unconscious?

Now a new threat’s arrived. One that’s set on taking her from me…and my Wolf roars with fury. I swore never to stay. But…her call is too strong and my beast howls in return… 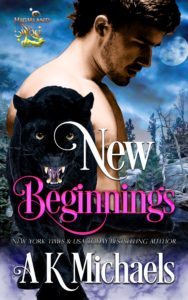 Destiny can take a detour…

Cameron:
I’m getting mated. My life’s changed beyond my wildest dreams, and my brother Grant’s arrived to carry out the ceremony. Only that doesn’t go as it should. No sooner does he get here and he’s almost in a fight with one of his closest friends. He’s the sensible one. What the hell’s wrong with him?

When Jinx and I find a young stray Panther alone in the forest, injured and fighting off a damn bear, we do what we have to: intervene and battle the bear to save the youngster. Afterward, I have to take him in…he’s alone with no family. I have no other choice. Do I?

So much is happening my head is spinning. Jacob and Rebecca are together, finally. The Packs are struggling to integrate. My businesses need me…and a new threat emerges. One I never saw coming. One that threatens everything 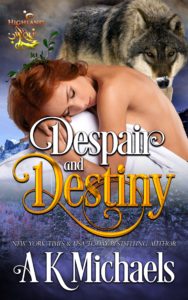 Destiny can be cruel….

Cameron:
Rebecca is gone. Kidnapped from right under our noses. How? Who the hell managed to sneak into our and Pack take her from us? Jacob is going out of his mind and I can’t blame him…if someone took Chastity…

His anger rolls off him like white-hot lava. We all feel it and we’ll all help him. No matter the cost. The answers lie in her past. Down a dangerous path, one we have to go but it’s fraught with danger…and deadly magic. We have to survive. Have to reach her in time. And the clock’s ticking… 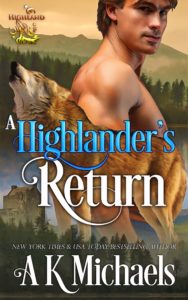 Grant:
I’ve been blessed by the Goddess. An ancient tale I’d thought was just a myth has proven true. My love’s heart and mine beat as one, and I can’t wait to show her to my Pack, my people, and my parents.

But when I do, I can’t believe what I see in my father’s eyes, or in my best friend’s. Truths are being revealed that I can’t ignore and must act upon before tragedy strikes. Before devastation, and betrayal destroys everything. I won’t allow it. I’ll fight to stop it. I’ll kill them…no matter the cost, to my heart and my soul… 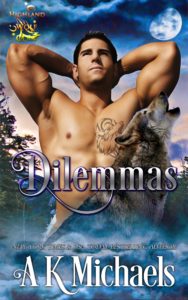 Mac is loving his life within Cam’s new Pack in the US, particularly his part-time work in Chastity’s new orphanage for abandoned, or abused, Shifter kids. Life is good, almost perfect. Then his beast starts acting strange and what entails tests him beyond anything he’s ever dealt with in his life. A dilemma that can only end in one of two ways: unending misery or a lifetime of joy.

Cam and Chastity are relishing their life as newly mated and as the Alphas of their new Pack when their world gets turned on its end. They’re thrust on a mission to rescue a hybrid Shifter baby and they also have their own dilemma and news that will bring the Pack a happiness that none of them would have thought. That is, if all goes as planned, and with Cam and Chastity, that is rarely the case. 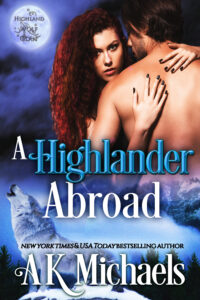 I’ve no idea why Grant, my alpha, sent me half-way around the world to visit another pack. He knows I hate travelling, and I’m not exactly the type to send on an international good-will visit. Whatever the heck that means. Something’s afoot, but I’ve no idea what. Not yet anyway.

When I arrive, suddenly everything changes. A scent hits me and I’m certain of one thing; she’s mine. The only problem is, she doesn’t know it. She’s scared, uncertain, and I have to ensure not to step out of line in a pack where they know nothing about me and where rogues are ready to attack with one thing one their mind … grab the woman who I know is my mate.

Can I ensure her safety? Or will I lose her forever? I’ll fight until my dying breath to save her. But, will I lose her after travelling half-way around the world? If I survive the battle, I know my heart and soul will wither and die if she’s taken from me …

Continue New York Times Bestselling Author, A K Michaels’ Highland Wolf Clan paranormal romance series to find out if Sandy triumphs in this action-packed story, filled with love, thrills and urban fantasy, as well as excitement, alpha males and hot Highlanders, together with enough adventures to keep you turning the pages into the wee hours of the night.

*Please note this book was previously published within Milly Taiden’s Sassy Ever After World under the title From Scotland With Sass.* 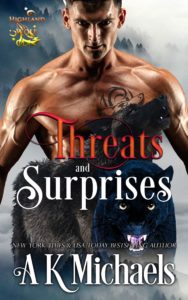 Destiny can be a cruel mistress…

I’ve been forced to pack land to keep my family safe. It’s my only option. My wolves will surely be able the answer to their protection. I can’t help but doubt my actions … when their lives are in peril, everything I do can put them at risk. If I lose any of them … it’ll break me.

I’m still alpha, I still have my duty of care to the pack, and I know Clayr is struggling with demons of her own. A side we never new existed roars to the surface to protect a child in her care and there’s the added problem of a ghost from her past arriving … I sense her wolf and it’s going crazy because of the new arrival.

There’s so much turmoil and enemies at every corner … can we survive? Can my family? If anything happens to them … will I?

*Please note this book contains adult themes, and some intense scenes, and is not intended for children. It could be upsetting to those of a sensitive nature.*

All books registered and copyrighted