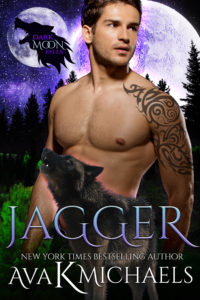 Welcome to Dark Moon Falls … where everything is not as it seems. It has secrets, shifters, romance, villains and so much more.

It’s just another day at the office for Deputy Jagger Johnson until Storm Earp crashes into his life, running scared from the madman chasing her. He’ll do his job, and not only because he’s a good officer. Since the moment they met, he knew she was more than a damsel in distress.

Storm’s scent drives him crazy. When he realizes who she is, he’ll stop at nothing to keep her from the clutches of the evil closing in.

Jagger might have to step over the line to save the woman he’d give his life for. A wolf doesn’t think twice when it comes to protecting their soulmate, and time’s running out.

Can he do the unthinkable to save her? Just how far will he go? Dive into Dark Moon Falls to find out if a deputy on the brink tips over, or not, in this thrilling paranormal suspense story from Ava K Michaels, that’s filled with action, romance, and enough thrills to keep you glued to the pages until the end.

Jagger is a stand-alone novel set within the Dark Moon Falls world and all stories can be read on their own. Grab it now …and  you  can  read  for  FREE  with  Kindle  Unlimited! 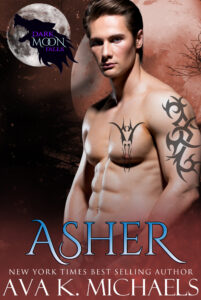 An ex-military cop looking for peace … instead, he finds a war in his heart and a battle against a rogue.

Asher Stone wants peace after years in the military, but he needs a pack when he picks a fight with his beta. His old friend Jagger helps him with both. A home and a job in Dark Moon Falls fits the bill, what he doesn’t expect is to run into Savannah Dark. A beauty with secrets and a past she refuses to speak of. She sets his heart on fire but when a rogue wolf has her in its sights … how far will he need to go to protect her?

Savannah Dark left her heritage and family years ago, wanting nothing to do with the curse it brought and living within ‘others’ was easy. With a no questions asked policy, a motto she’s lived by for years. Until Asher Stone. Strong, handsome, and sexy-as-sin. The shifter who threatens her secret … and her heart.

And the rogue who knows who she is, what she is, and wants her for her power. The one thing she’s vowed never to use. Is she willing to die for her principles?

Will these two find true love, or will the rogue tear them apart forever? Read Asher, A K Michaels latest Dark Moon Falls paranormal romance filled with intrigue, danger, and a whole lot of shifter love.

Elias Grant’s spent his life taking care of his pack and makes it appear as if danger and treachery are mere hiccups in his road. Strong, stoic, and never show weakness, that’s his lot.

Waking one morning he senses something wrong within Dark Moon Falls and expects just another day at the office. Only it’s not. This time what’s coming will change everything; for the pack, for him, forever.

A girl on the run, but she’s no ordinary female. She has powers he’s come across before … and she’s used them. Now she’s in trouble and needs his help, but she’s not just any girl looking for help: she’s his.

She brings danger on her tail, trouble to his pack. What will he risk for her? The answer is simple; everything. Elias will go to Hell, and back, to save her, and do it with a damn smile on his face. At last, the Goddess has blessed him, and he won’t stop until she’s safe.

Can Elias survive the danger and save the most precious thing in the universe to him? Or will he fail and die in a hail of flames? Find out in this exciting addition to Dark Moon Falls … a world filled with hot shifters, steamy paranormal romance, urban fantasy and enough thrills to keep you glued into the wee hours of the night in Ava K Michaels exhilarating love story.

Check out our trailer!