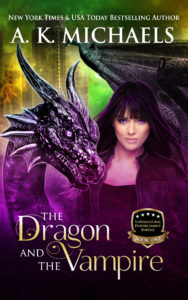 The worlds of Vampires and Dragons collide in this hot paranormal romance adventure.

Starr is a Vampire-loathing Dragon, hunted for her magical essence and quickly running out of time.

Ronan’s the director of the Supernatural Enforcement Bureau, tasked with finding, and keeping safe, the last Dragon alive.

Together, they must defeat the rogue Vampires and dark-magic wielding Witches on her trail…but can Ronan resist the draw of her beauty, or will her violet eyes call him like a moth to the flame?

If these two can’t set aside their attraction and their differences, earth will lose the last Dragon to darkness.

A K Michaels’ Supernatural Enforcement Bureau series is a thrilling and fast-paced paranormal story that’s filled with action and romance to keep you turning the pages into the wee hours of the night.

Paperbacks of this stunning creation are available on Amazon and B & N… get it now! If you’re interested in a signed paperback, please get in touch. 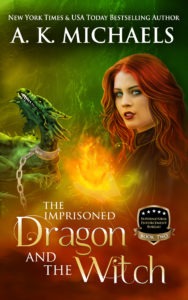 Wolf Shifter and SEB operative, Serge, has finally located the remote cavern in the Rockies that holds a Dragon prisoner. Exhausted and cold he knows time is of the essence if they want to save it before it succumbs to the cruelty it’s been subjected to whilst held captive.

Vampire Ronan and his new love, the beautiful Dragon Starr, rush to implement a rescue party. Their plans seem to fall apart as they uncover a plot so mind-blowing that Ronan’s ‘boss’ aka the President of the United States, wants to send in the troops.

Barely averting that disaster, he realizes the entire load now rests upon his shoulders. Can he pull off a massive operation, covering the entire United States and beyond? Can Starr withstand a deadly blast of dark magic power?

And you can get this beautiful paperback on Amazon and B & N… get it now! As always, if you’re interested in a signed paperback, please get in touch. 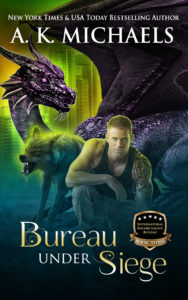 Evil is headed toward Ronan and his crew…and the Supernatural Enforcement Bureau will soon be under siege.

SEB operative, Creed, thought he’d escaped his past but now it’s caught up with him. An evil Vampire with his own army is hell-bent on destroying him and anyone who stands between them…women, children, nobody is safe.

Ronan, together with his Dragon mate, Starr, band together with the whole of the Bureau, determined to protect everyone because their adversary doesn’t care who gets hurt in the crossfire. But is it a losing battle and can Ronan keep Starr’s secret from those he loves at the same time?

Lives will be lost, secrets will be revealed…and can Creed finally put his past to rest and find peace?

Bureau Under Siege…the thrilling culmination to A K Michaels’ Supernatural Enforcement Bureau series, filled with passion, excitement, paranormal romance and enough adventure to keep you glued to the pages until the very end.

Once again you can get this as a paperback at both Amazon and B & N, and if you’re interested in any signed paperbacks, please get in touch. 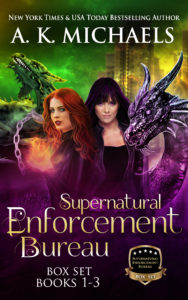 Do you want to binge read this thrilling and steamy series? You can, right here and now… the boxset is available for you to curl up and lose yourself in all of the above stories but there’s one thing… remember to lock the door and turn your phone off!