I’m so excited about the release of our brand new world … Dark Moon Falls and the set with so many new stories for you! But I thought I’d introduce you a little more to Jagger, my character, and give you a couple of wee snippets from his story … hope you enjoy! 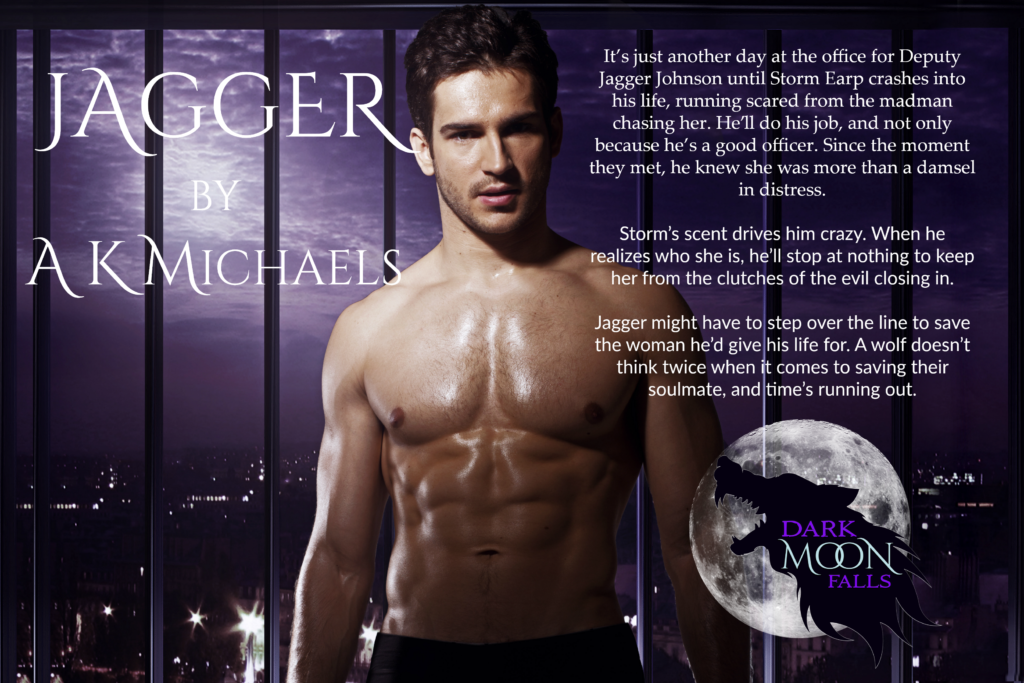 “You always do that? Organize the food before starting?” He pointed to her plate with his knife.

“Of course.” She frowned. “Less time waiting to eat it if I do, and I like to be organized. One piece of pancake, one of banana, and a dollop of cream. Voilá … heaven.”

Storm popped it into her mouth. Oh jeez, it tasted amazing. She hummed with delight and Jag stopped with his fork midair. Another rumble in his chest. “Damn, Storm, you’re making it hard for me to think straight.”

He reached over with his finger stretched out. What was he doing? Then he slowly wiped along the side of her mouth. Jag held his finger up with cream on the point before slowly pulling it back and sucking it clean. Storm’s heart almost stopped beating before it sped up, thudding wildly in her chest, her breathing coming in short, sharp gasps. Fuck! Her thoughts were going haywire, completely and utterly in the gutter. Her eyes locked on his mouth when his tongue swept along his lips slowly.

Holy hell. What would it feel like to have his tongue on her… Whoa! Stop it!

Storm forced a deep breath inside her, her eyes raising to his. “I’m fine,” she managed to get out.

What? No, shoot, he couldn’t do that? Could he? Shit, of course he could. He was a wolf.

Storm pulled another breath inside her before tipping her chin up. “That’s rude. A bit like eavesdropping on a private conversation. Listening to my … my … body.”

Then she popped another mouthful of food in and chewed slowly, with her brow raised, before she purposely swallowed, then mirrored what he’d done. She ran her tongue over her lips. Storm took her time doing it, too, a long time. Starting at the outer edge on her bottom lip and dragging it along before she went up and over the top, then popped it back inside with a smile.

“Thanks for recommending the pancakes. They are yummy, and the cream, it’s amazing.” She picked up another forkful, ready to repeat the performance.

“Stop,” Jag ground out. “Storm, you have to learn something … don’t tease a hot-blooded wolf. Not unless you want to take things further with them, and definitely not in a public place, because we don’t care where we are or who the hell’s watching.”

Jag gave her a smile. One that lit up his eyes and gave her all kinds of tingles inside. A smile and she was all warm and fuzzy. What on earth was going on here? They hardly knew each other and yet … she felt like she’d known him forever, and the feelings inside her? Well, those were off the damn charts.

“You feel it, too. Don’t you? I can see it in your eyes. I can hear your heart speeding up, Storm. Tell me you feel this between us … or tell me I’m crazy. Just tell me something before my head explodes.”

She did, of course she did, but she didn’t know what the hell it was. Storm nodded. “What is it? I have to admit, this scares me, Jag. It’s not natural, it’s not normal for me to act like this or feel like this.”

Jag scooted over, his hands cupping each side of her face, and then … and then … he bent down and pressed his lips to hers. Soft. They were soft, but also hard. How could it be, but it was. His tongue sought entrance and she opened willingly for him, allowing him in to explore and tangle with hers while one of his hands reached around to twist inside her hair. Storm moaned, her teeth clashing with his, struggling to move closer to him, lights dancing behind her eyelids as explosions started to go off inside her.

Every part of her body came alive, every cell inside her buzzed as if she’d been struck with electricity, and she’d never felt such passion ignite within her from a kiss in her entire life. Her whole body wanted to meld to Jag, to wrap around him, to…

Then he pulled back, leaving her a hot mess and gasping as if she’d run a marathon.

Remember to grab your copy NOW for only 99c! Price goes up after release guys so don’t miss out! 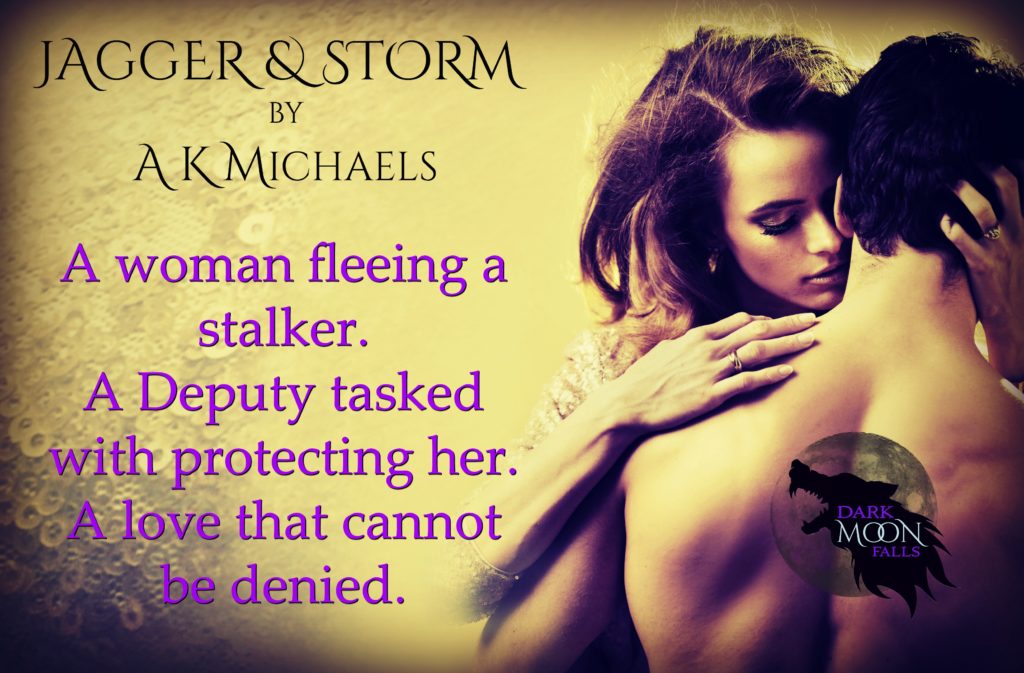